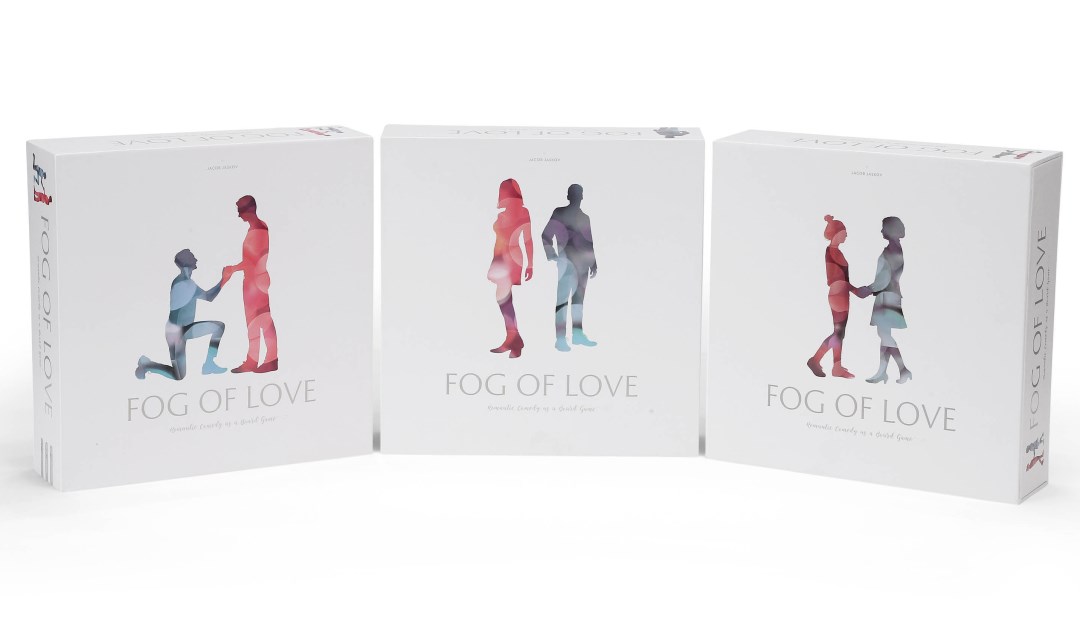 Game: Fog of Love
Players: 2
Try it if you like: Consenticle, Dungeons & Dragons

In Fog of Love there are no winners, and there are no losers. It’s a cooperative game for two players, but there is no traditional end-game objective besides wrapping up the relationship you form throughout the game. In this game the goal is to tell a compelling story of a made-up relationship between your and your partner’s characters.

Billed on the box as a ‘Romantic Comedy as a Board Game,’ it really can be boiled down to that at its most simplistic. Both players create a character, give them a name, come up with as much or as little backstory as they like, and play out various sweet, serious, and dramatic scenes that could occur over the course of their relationship. Scenes can be funny, like asking your partner what’s the most embarrassing thing they’ve ever done in front of a group of people; or they can be awkward, like when you go for a photoshoot together and both want to be the big spoon while posing. You’ll need to make mature decisions, like whether or not you should open a joint bank account; and confront difficult situations, like why you were texting or hanging out with your ex.

Based on your chosen occupation (Baker, Politician, Internet Seller, and dozens more) and the features which first drew your partner to you (Bedroom Eyes, Stoner, Wheelchair, Hairy, and heaps of others), you’ll begin the game with a few personality indicators. These will note whether you’re more outgoing or shy, more adventurous or withdrawn, more organised or reckless, and other such personality types.

Every action you take, every decision you make, basically every scene that plays out will affect your personality, your affection level to your partner, or both. Whether your relationship is smooth sailing or crashing over rocky shores, the game continues until the final scene has been played in the chapter. There can be several outcomes to the game ranging from the couple staying together in a mutually happy and respectful partnership to having a messy, dramatic break-up, to the relationship persisting even though only one of you is happy in it.

There are 4 separate stories to play out in the base set (our copy includes the expansion, kicking that up to 7), but there is so much more replayability than just those 4 playthroughs. Featuring a plethora of scenes, occupations, physical features, and personality traits, you could play through the same story time after time with new characters and come away each play through with vastly different experiences and relationships.

I’ve seen a bunch of takes on Fog of Love during my internet searching, and your mileage may definitely vary. Some folks reckon it’s a game that should only be played by couples in a committed relationship, while others insist they hated playing with their real-life partner because they had to act so differently, according to their characters’ wants and not their own.

Personally, I see Fog of Love as an excellent primer for more in-depth tabletop gaming such as Dungeons & Dragons. Think of it as D&D-lite, but with dating. Dinner & Drinks, if you will.

Just like with D&D, you’re working your way through a story and making your own decisions. The scene cards will often give you prompts, then leave the nitty gritty of the story to your imagination. When you create a character, what’s their name? Are they a simple Reggie, or a sophisticated Reginald P. Shoemaker III? They work as a Teacher, but what do they teach? Maths or science? Primary school or university? Sign language or swimming? The game sets it up, but you as the player have the opportunity to give it as much depth as you want.

I’m a casual D&D player with no experience DMing, partly due to my lack of confidence in improvising story as I go along. Playing Fog of Love immediately struck me as an incredible tool to work on those improvisational skills. I fumbled my way through the tutorial with my wife, and admittedly I wasn’t super happy with some of my own character explanations, but those stumbles and hiccups helped me learn how I can approach a situation better in the future.

Similarly, if you’ve been interested in trying D&D but haven’t made the leap into actually trying it out (like with our monthly TableTop Tuesdays, for example), Fog of Love offers a great environment for just you and a friend to try some lighter role-playing without the pressure of being in a large group where you may feel more self-conscious.

Regardless of whether your interests extend into tabletop RPGs, this game is certainly worth playing at least twice (I say twice because the tutorial is an excellent primer for the full game, but once you’ve played through it you should absolutely go one more round with a longer story once you’re familiar with the mechanics) just for the entertainment factor. Even when my character made decisions I wasn’t entirely happy with, my wife and I still shared some good laughs due to the situations we found ourselves in.

Whether you play through a story with your partner at the end of a busy day to relax or bust it out at a games day with friends for others to watch the love story unfold as your audience, Fog of Love will certainly give you some memorable stories to recount.